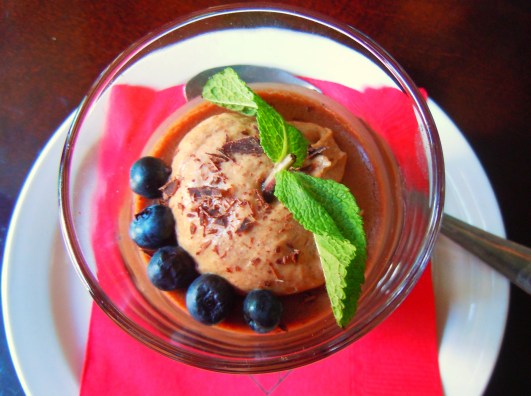 Oh, how sweet it is to cap off a fabulous meal with something…spicy?!  That’s right, folks.  Here at Milagro, the decadent, the sweet, and the spicy strut their stuff together on the runway that is their dessert menu with punchy, spicy chocolates, rich and creamy caramels, and refreshing fruits with a kick of heat.  With such an impressive menu of regional Mexican mains and appetizers, I was beyond excited to dig into whatever they offered for dessert and to my delight, there were more than a few options to tantilize my taste buds!

Milagro’s dessert menu is comprised of tequilas (digestivos for the end of a meal), coffees and Mexican drinking chocolate, and sweet and spicy dessert creations.  Their menu lists 5 different dessert dishes (priced $6.95 to $8.95), but there’s actually 6 because one of them is a dessert special that changes on a regular basis, based on what’s in season and what’s appropriate for the season.  On this particular day, Milagro’s special dessert was a juicy and refreshing homemade mango ice cream with chili peppers!  I KNOW, you can’t get this anywhere else!   And while it’s something you’d never expect, it completely makes sense because Milagro utilizies spices and manipulates heat in all their dishes to create food that is uniquely their own but still very much in keeping with traditional, authentic flavours and techniques that have deep historical roots in Mexican cuisine. 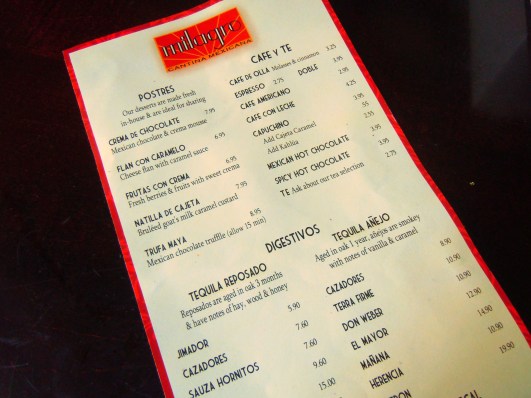 The 5 desserts listed on their menu include a Flan Con Caramelo (cheese flan with caramel sauce), Trufa Maya (Mexican chocolate truffle), Frutas Con Crema (fresh fruits and berries with sweet crema), Natilla De Cajeta (bruléed goat’s milk caramel custard), and my pick, the Crema De Chocolate, a Mexican chocolate and creama mousse!  Mexican chocolate is something you would find at ChocoSol in its raw, pure form, whether its in thick, round disks, as Mexican drinking chocolate, or in rich, delicious chocolate vegan cookies.  The usage of spices (cinnamon, tamales, chilies, achiote, allspice, and others) is exactly what makes Mexican chocolate distinctive along with its natural, raw, dark bitterness.  This uniqueness completely shines through via this decadent, velvety smooth dessert because only at Milagro will you find a dainty chocolate mousse that will bat its sweet eyelashes at you on the first bite and then turn around to give you a kick in the pants with a rapid succession of little bursts of heat!

The Crema De Chocolate is a rich, velvety smooth Mexican chocolate mousse dessert with two layers of chocolate (one lighter, one darker), blueberries, a spig of mint, chocolate shavings, and – wait for this – Mexican chilies!  You have this glass filled with rich, creamy, airy mousse and as you’re spooning the delightful chocolate in your mouth, you get punched with tiny beads of chilies!  Spicy chocolate may not be mainstream per se in Canadian cuisine, but is it ever a stand-by in Mexican.  I’ve only ever seen spicy chocolate on The Food Network (one of the chefs on “Best Thing I Ever Ate” was raving about this spicy chocolate ice cream in the States) and at farmers’ markets where ChocoSol sells their 5 Chili Bullet flavour as part of their selection of Mexican chocolate.  Otherwise, spicy chocolate has for the most part been unexplored terrain for me up until this point.

I tried to capture the texture of the chocolate mousse as best I could, but you have to taste it to truly believe it.  The chocolate mousse is so incredibly nuanced in both flavour and texture and it’s unlike anything I’ve ever had.  The mousse is so deliciously fudgy, cocoa-y, and creamy with that unmistakable bitterness that is inherent in real chocolate.  It is not a “sweet” dessert in the sugary sense of the word and it demonstrates beautifully how a dessert doesn’t have to be oozing with sugar to taste amazing.  The texture is perfect because it’s not too thick and dense but it’s also not too airy; it has substance and body to it so that it actually sits and melts in your mouth, letting the flavours sink in. 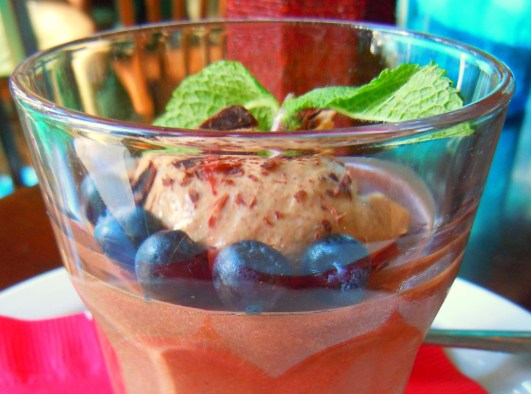 And the chilies!  All throughout the dessert there were the tiniest of red beads and they gave off little bursts of spiciness and heat to kick the chocolate mousse up a notch.  The level of spice wasn’t overwhelming and I really think the creaminess of it mellows everything out, from the chilies in the dessert to the spices that might still be lingering from the scrumptiousness of dinner.  It’s a dessert that has so much flair and complexity in terms of flavour and texture and yet, the simplicity of it as a whole is what makes it so special.