Just in case your sweet tooth is begging for mercy (I’ve had my share of cookies, cupcakes, and other treats over the past several days; guilty as charged), today’s offering of treats is the last of the bunch in the Hallowe’en Headquarters series and I’m sad to see it end!  I’ve really warmed up to the cutesy header image, background colour, and colour scheme (I’m quite fond of lime green) and it’ll be bittersweet saying goodbye to it.  It was Ate by Ate’s first Hallowe’en and I’ve had so much fun being mummifying and spookifying the blog!  I wish I had another week to post more goodies (or rather, I wish I had just started earlier!), but I’m glad I got the chance to show you all at least a few yummies around the city.  If we’re bidding farewell to the haunted holiday, we’re going out with a bang – Short & Sweet cupcake style!  Like I would let Hallowe’en come and go without a visit to my favourite cupcake shop 😉

Hallowe’en was a big deal for Short & Sweet for a number of reasons.  First, it was the shop’s first major holiday celebration at the new location on Avenue Rd.  Second, Hallowe’en fell on a Monday this year and Short & Sweet doesn’t normally open for business on Mondays, so it was a crazy, whirlwind day on their part!  There are plenty of shops in the city that aren’t open 7 days a week and I can imagine what a pickle it becomes, as a business owner, when you’re faced with the dilemma of wanting to stay open for a specific holiday or occasion on the very day that you’re business is supposed to be closed.  It’s the desire for more business versus possibly being short-staffed, majorly overworked, or just not having enough resources to accomodate. 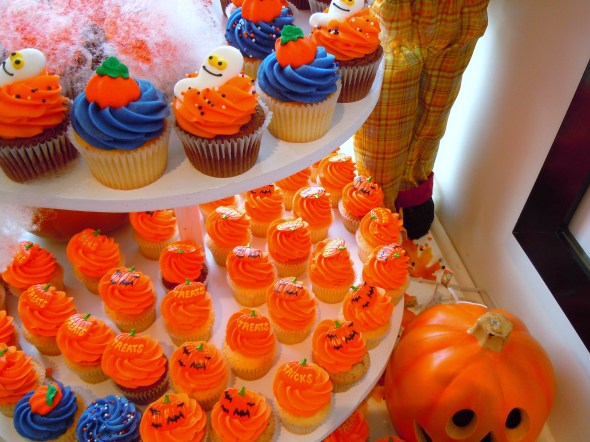 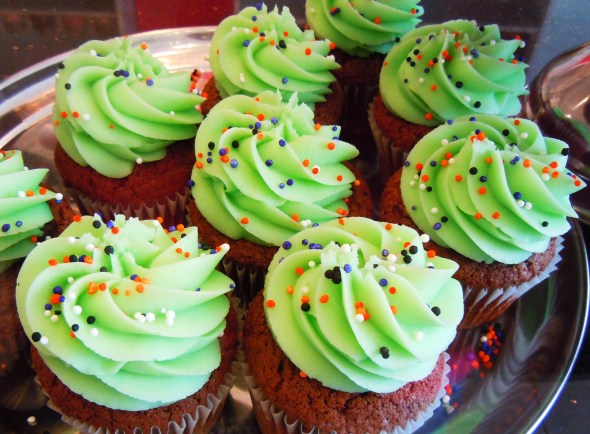 I’m biased, but I’m happy they decided to open this past Monday!  While I was drooling over Short & Sweet’s special Hallowe’en themed cupcakes and snapping away with my camera, people were picking up orders left and right and I had to tell at least 4 or 5 people who came in after me that I was not, in fact, ordering (yet) and that they were more than welcome to go ahead of me.  I was too busy gawking.  Their selection of cupcakes were all sporting a mixed flurry of frosted, sprinkled orange, white, purple, and black and everything looked so pretty and festive!  Some cupcakes had bright, rich, colourful frosting (Ice Ice Baby had a fiery orange vanilla frosting while Penguin Suit looked dapper in a gorgeous jeweltone purple with sprinkles) while others were dusted with orange, purple, black, and white sprinkles, pumpkin candy toppers, and Hallowe’en trinkets.

I picked up one for myself (October’s Pumpkin Spice with pumpkin spice cake and cream cheese frosting) and one for my brother (the chocolate, fudgy Rich in Recession with a Hallowe’en appropriate pumpkin candy on top) and good god did my brother ever go to town with his cupcake when I brought it home for him!  Forget trick-or-treating, cupcakes are where it’s at!  My brother is a chocolate fiend and while he was stuffing his face, he managed to mumble out, “Mmm, chocolatey goodness, chocolate frosting is so good” in between mouthfuls of, well, chocolate. 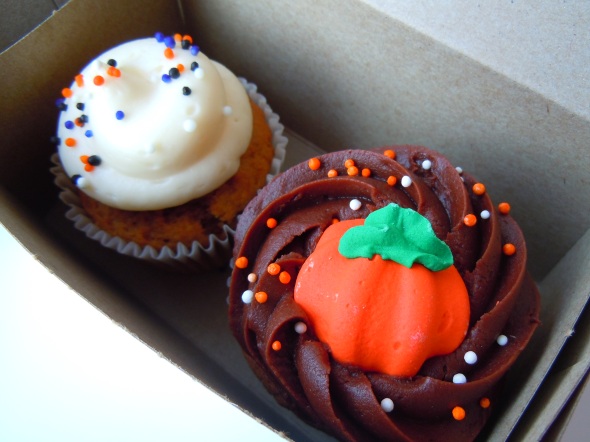 And my cream cheese frosted pumpkin spice cupcake was a mixture of sweetness, tangyness, and thick creaminess, which is a defining feature of Short & Sweet’s cupcakes.  The frostings are thick and creamy and you’ll never find a frosting here that’s airy and whippy.  The cake itself had an earthy, pumpkin flavour and the nice thing about it was that it wasn’t overloaded with the spice component.  I enjoy spice combinations like cinnamon, nutmeg, cloves, 5-star, anise, etc. but too much makes the pumpkin flavour taste artificial.

I don’t know what it is about pumpkin that makes the texture of cake so different, but pumpkin cupcakes are so different from the regular vanillas and chocolates.  They’re not fluffy per se, and they’re not like muffins because muffins have more of a crumbly texture to them.  The pumpkin spice cupcake was so full of body.  You feel like you’re eating a loaf cake with frosting and it’s the type of cake you can envision yourself having as a morning breakfast snack, or taking out of your oven in a loaf pan.  I don’t mind one way or another, but if you prefer the “pillow” type of texture, the pumpkin cake probably isn’t for you.  Even though the density of it takes some getting used to, I enjoy the flavour and I’m happy I got the chance to try it!

Hallowe’en at Short & Sweet was super fun and this whole series was a blast to do.  I hope you all liked the series, as short as it was, and had fabulous Hallowe’ens!  November is now upon us and there’s so much to look forward to.  I’m excited to churn out more Fall Harvest posts and I have a few holiday ideas up my sleeve as well!  If you have any leftover Hallowe’en sweets, enjoy them! 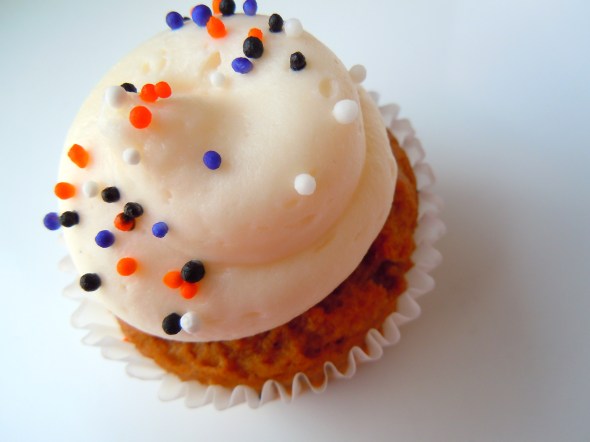 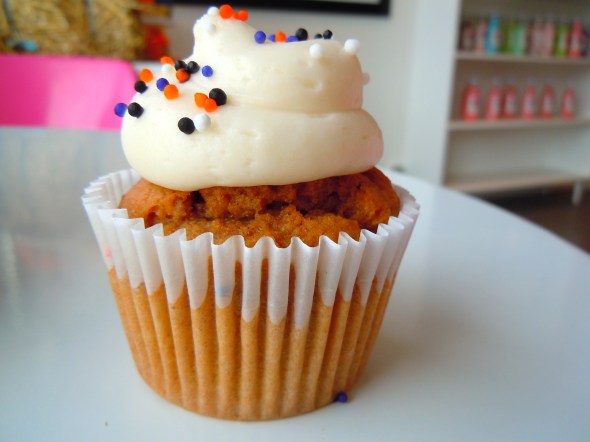 “Donuts, is there anything they can’t do?” asks Homer at the end of Marge vs. the Monorail.  I love this Simpsons episode to pieces (who doesn’t?!) and although I enjoy donuts and have quite a few favourites and weaknesses, I have to counter that question and respond with a “yes”.  Because a donut can’t be a cupcake and it certainly can’t be the Sprinkler from Short & Sweet Cupcakes!  You all know that Short & Sweet is my holy grail for cupcakes in Toronto and you all know I have made many a visit since my first one in the spring.  However, there are still cupcakes that I haven’t actually seen in person and this is because their cupcake selection operates on a routine rotating basis.  Wait, routine and rotating in the same sentence?  How does that make sense?  Let me explain.

Short & Sweet has a slightly different selection of cupcakes every day during the week and they go ALL OUT on the weekends, nearly doubling their selection compared to, say, Tuesday.  What you see on Tuesday is what you will see EVERY Tuesday.  And what you see on Thursday, for example, is what you can expect to see the next Thursday.  Followng me so far?  There are certain cupcakes that are available every day and certain ones that only make their appearance once a week or during the weekend.

Depending on which day(s) you frequent the shop then, there could be cupcakes that you’d miss completely and this has certainly been the case for me.  I’m accumstomed to visiting the shop during the week, most of time in the middle of the week on Tuesday or Wednesday (they’re closed on Mondays).  This is why, on this particular Thursday back in July, I finally saw the Sprinkler up close and in person and there was no way I was going to leave the shop without this pretty little thing.  A cupcake that looks exactly like a rainbow sprinkled, technicolour donut?!  YES PLEASE. 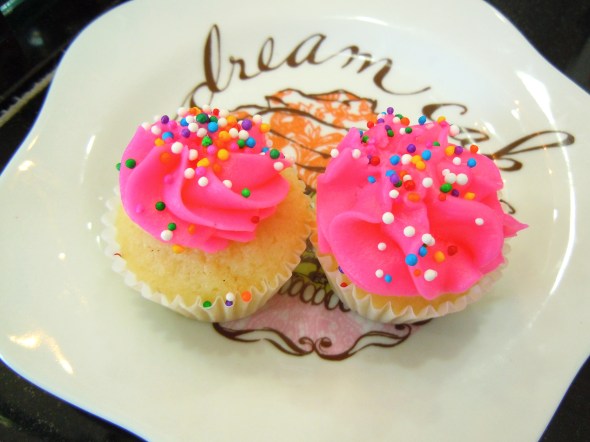 Everyone feels differently about sprinkles though.  My dad, for instance, hates sprinkles with a passion because he has bad teeth.  He’s had issues with his teeth for years now and because of their current condition, things like sprinkles get stuck between them and I think they’re even susceptible to cracking given how crunchy sprinkles are!  Some find them messy and others are kind of indifferent about them.  I, on the other hand, LOVE sprinkles and I always have.  Tubular ones, tiny round balls, crystal sprinkles, cute shapes, I adore them all and I think that they add so much character and fun to desserts.  I get rainbow sprinkles and chocolate sprinkles on my ice cream and soft serve, I adore sprinkles in my shortbread cookies, and I get giddy at the thought of dunking a frosted cupcake into a bowl of sprinkles and having the sprinkles stick all nice and pretty to it.

If you love sprinkles and you’re a fan of sprinkled donuts, this was made for you.  This is like a sprinkled donut only, in my opinion, 10x better!  The vanilla cupcake is soft, moist, and sweet and the frosting with the sprinkles is just out of this world.  You know how sprinkled donuts have that layer of sweet frosted glaze that helps the sprinkles stay on?  Imagine that sweetness but in the form of a thick, super creamy, lickably good frosting.  The kind of frosting that makes you want to dip your finger in it and go to town.  The Sprinkler is like a donut, birthday cake, and whipped frosting straight from the mixing bowl all wrapped in one.  I made an absolute mess of myself with the frosting drooping down my cupcake and some of the sprinkles bouncing away after the first bite, but it was so worth it.  It’s fun, colourful, and so perfect for the kid in all of us. 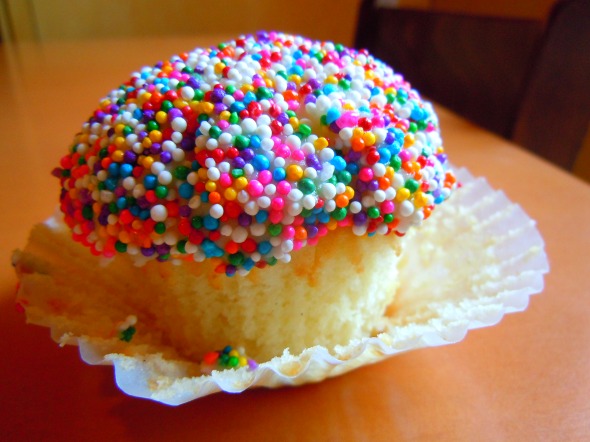 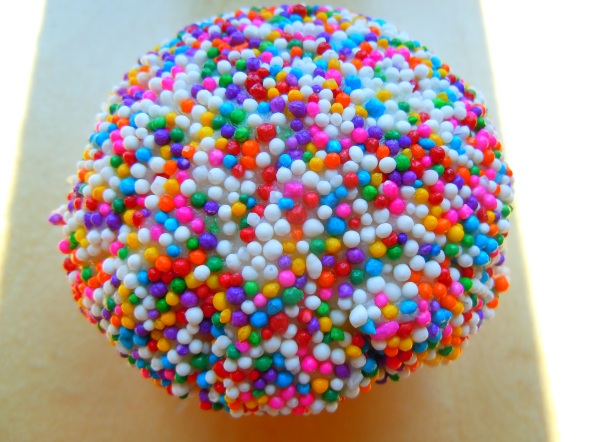 I know I haven’t posted pictures of the new shop since Short & Sweet moved and I’m sorry for that!  I have new photos, but I just need to formulate a cohesive post dedicated specifically to the new location.  The photos I have of the Sprinkler (and its coordinating scrapbook layout which, by the way, was a blast to make) are the last batch from the days of their old shop, so I am ready and raring to go with new location material!  I’m really excited because this Saturday on the 10th, Short & Sweet will be holding their grand re-opening party to celebrate their successful move to their new location 3 blocks north.  From 1pm-4pm, they’ll be holding a cupcake party with drinks, giveaways, and of course, plenty of their amazing cupcakes!  You can bet I’ll be there 😉

Scrapbooking materials used: to be added.

I’m excited to pass the word along that Short & Sweet Cupcakes has successfully moved to their new home, 3 blocks north of their old location.  Previously on Old Orchard Grove off Avenue Rd., they are now operating all shiny and new at 1945 Avenue Rd. and I am really looking forward to seeing the new place and of course, picking up a cupcake or two!  To celebrate, here’s a look back at their old location where I found my holy grail cupcakes in the city.  When I first embarked on this cupcake tour of mine, never did I think that I would find a cupcake shop that has made me feel more welcome and at home than Short & Sweet.  Coming here has become much more than just getting a cupcake or sugar fix; it has become a muse for me, and a place where I have made genuine relationships that I can only see growing as time goes on.  To Short & Sweet, congratulaions on a successful move and to everyone else…get yourself some awesome cupcakes 😉  To view all my past Short & Sweet scrapbook layouts and to relive all the Short & Sweet cupcake love, click here. 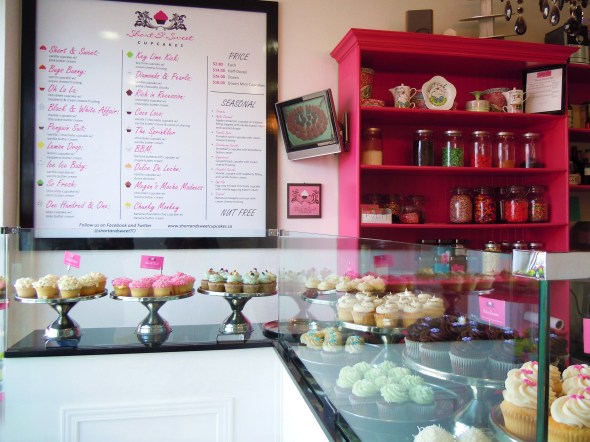 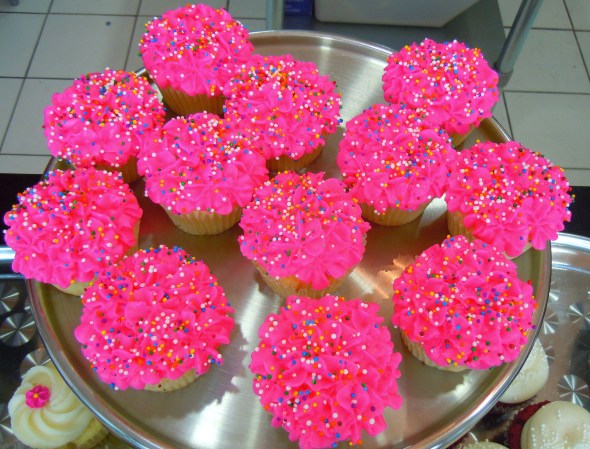