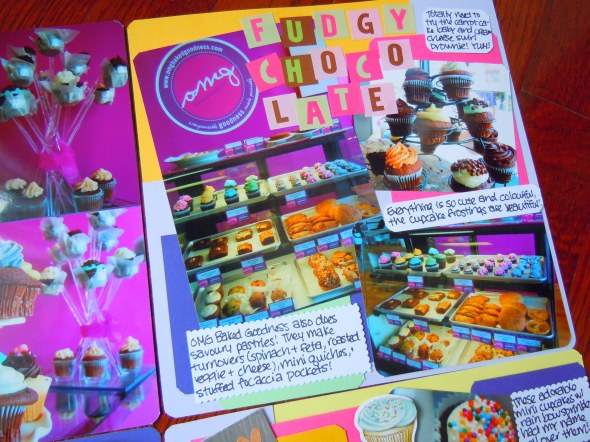 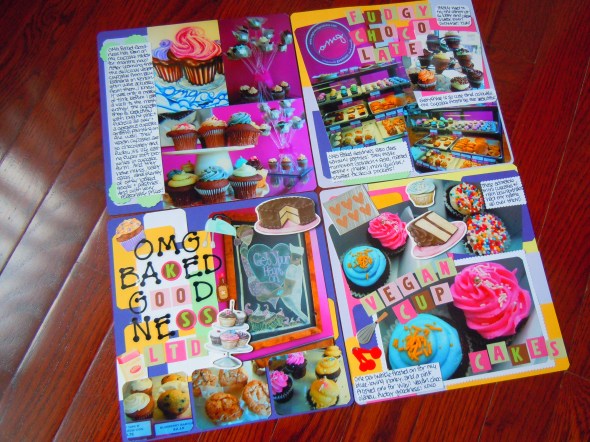 I miss the café at Blue Banana in Kensington Market.  A lot.  When I found out that they packed up their adorable café with some of my favourite chocolate vegan cupcakes, I was crushed.  They had big, soft, moist, and densely chocolatey vegan cupcakes that had thick, amazing frosting in fun colours and edible pearls and sugar crystals.  Not only that, they had carrot cake cupcakes, brownies, giant cookies, and other goodies like Turkish Delight and chocolate covered pretzels.  It was cute and fun and I looked up at the food gods and silently thought, “you are so mean.”

Thankfully, all of us who adored those cupcakes don’t need to fret because they’re not entirely gone.  Gone from Blue Banana, yes, but not gone from the city.  For those who weren’t aware, Blue Banana’s yummy vegan cupcakes were supplied by the cute and flashy OMG Baked Goodness Ltd. on Dundas Street West and they’re very much alive and kickin’ (and currently supplying to a number of cafés and retailers all over the Toronto) near the intersection of Dundas West and Dufferin St.  I have been meaning to go to OMG for ages, ever since I learned that Blue Banana’s cupcakes came from here.  A cupcake munchie like myself has to visit the mothership, right? 😀  I was so excited to continue my own little personal cupcake tour by coming here because really, the visit was long overdue!

OMG Baked Goodness is beautiful.  If you love pink and colourful brights, it’s it a feast for your eyes.  If you love fluffy cupcakes with frostings in every colour of the rainbow, it will make your cupcake-loving heart swoon.  And if you’re gaga over photo ops, well…be prepared for a few finger spasms!  They have a giant cupcake graffiti painting on their wall!  It makes my heart happy.  OMG isn’t just your resident vegan cupcakery though.  Aside from cupcakes, they bake babycakes (which resemble very large muffins with big tops), brownies (cream cheese ones and walnut ones to name a few), cookies, and savoury eats such as mini quiche pies, spinach and feta turnovers, roasted vegetable turnovers, and stuffed focaccia among many others.  Prices range from $3.25-$4.00 for savoury food items, around $2.15 for babycakes, and $2.75 for brownies. 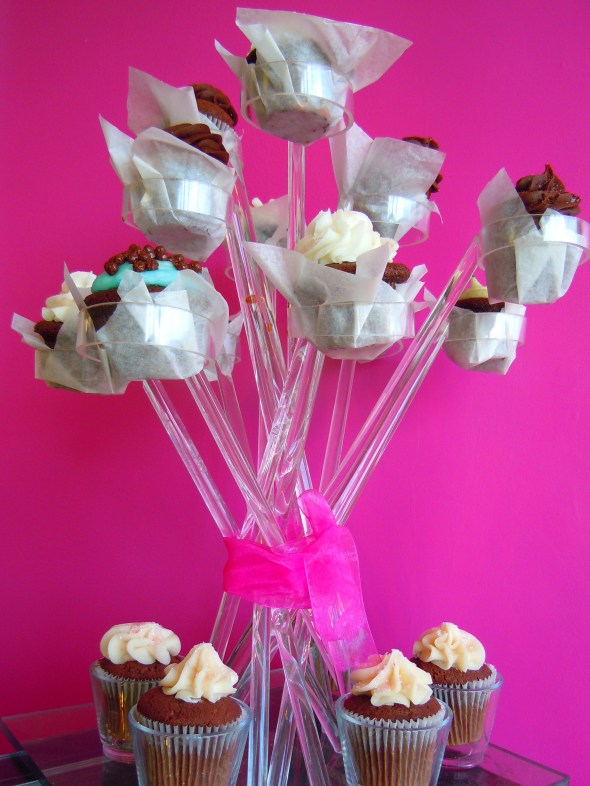 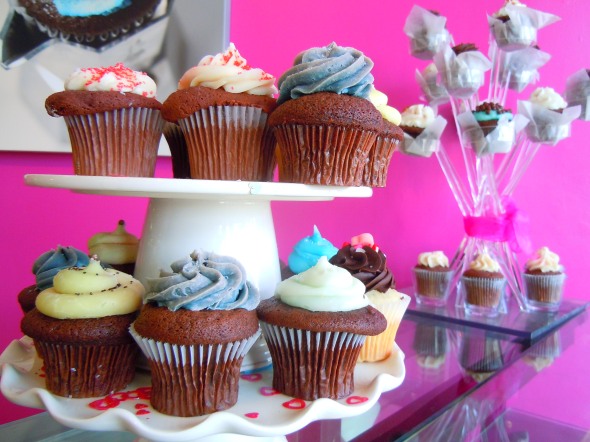 OMG is totally on the ball with having their baked goods ready to go when they open for business, and even before they actually open!  After getting off the Dundas West streetcar and walking over from College St. (construction in the city = route detours, not to fret), I saw the lights were on and the girls baking inside and got confused because I could have sworn I had arrived there earlier than 10am.  And I did, but there it was with its “Open” sign beckoning me to come in and the nice girls ready to serve me.  Sweet!

Now, I may not be able to describe or comment on any of their baked goods aside from the vegan cupcakes, but give me a month and I’m sure that can be changed 😀  What I love about their chocolate vegan cupcakes is how moist and FUDGY they are.  Oh my goodness, THIS is what chocolate is supposed to taste like.  The chocolate cupcakes taste like fudgy brownies only in cupcake form.  I snatched up two regular-sized cupcakes ($2.75 each, which places them right in the middle price-wise compared to other cupcakeries in Toronto) and two minis with a smattering of rainbow sprinkles!  The minis come in at $1.50 each and the frostings are so cute and colourful.  There was no way in hell that I was going to give up mini cupcakes with rainbow SPRINKLES all over them.  I love sprinkles the way peanut butter loves jelly.

The minis were awesome.  You know what they tasted like?  A cross between a moist chocolate cupcake and a sprinkled donut with frosted glaze!  Obviously the frosting wasn’t just a glaze, but you get what I mean.  I shoved them in my mouth and loved them dearly.  I do wish though that the frosting on the regular-sized cupcakes was a bit thicker just because it wasn’t as thick as the frosting I remember eating from the ones at Blue Banana. 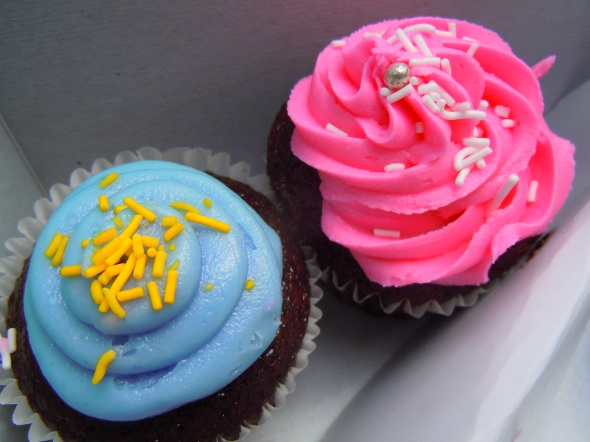 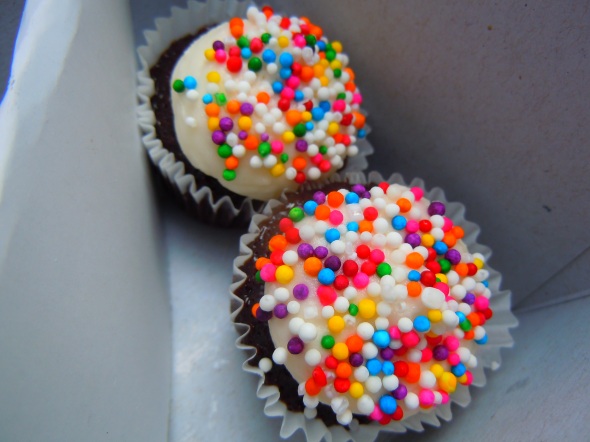 These are solid, good chocolate vegan cupcakes though and the prices are very reasonable in comparison to other cupcakeries.  At the lower end price-wise, there are a handful of places that sell them for $2.50 (Sweet Escape Patisserie, For the Love of Cake) and $2.65 (The Cupcake Shoppe).  At mid-range we have Short & Sweet Cupcakes coming in at $2.90, Prairie Girl Bakery at $2.95, and of course, OMG Baked Goodness at $2.75.  Rounding out the higher end are Bunner’s Bake Shop ($3.25) and Lollicakes ($3.00).  Granted, there are MANY cupcakeries in Toronto that I haven’t listed here, but you get the idea.  I’m not vegan and I really enjoy their chocolate cupcakes.  When I try out some of their other goodies (I saw a babycake that looked like it has marshmallow in it OMG), I’ll be sure to share some more!  I hope you all like the photos and the scrap layout and if you’re wondering about those cupcakeries that I listed but didn’t link…well, let’s just say some more cupcake blog posts are in order in the near future 😉 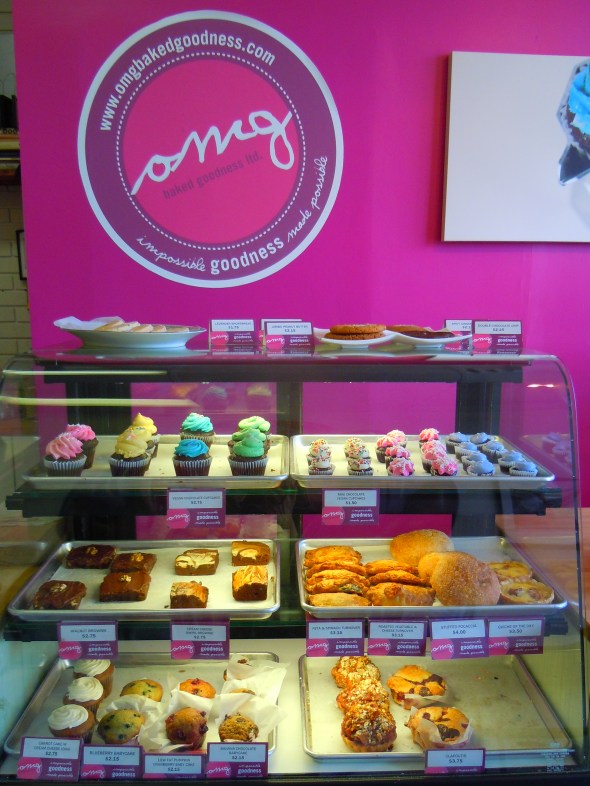 OMG Baked Goodness is located at 1561 Dundas Street West, west of Dufferin St. at the corner of Sheridan and Dundas West.  They are open from 10am-7pm Monday-Saturday and from 12pm-5pm on Sunday.  You can view their products on their website here. 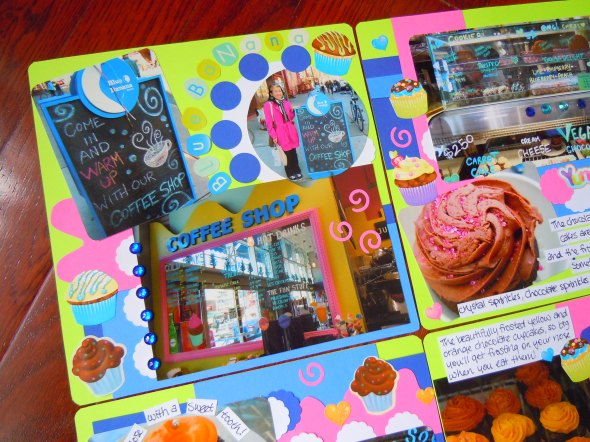 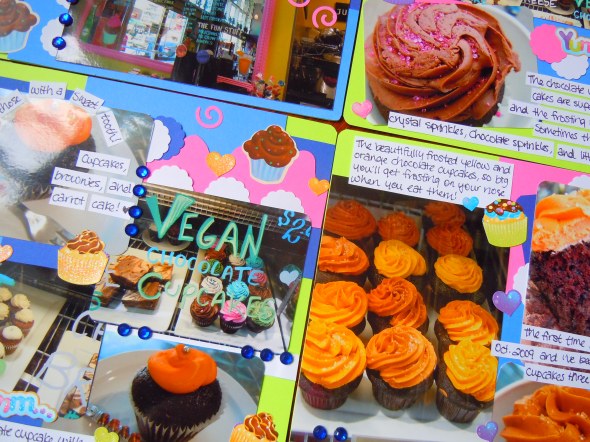 Oh how I’ve missed blogging about cupcakes.  I know it hasn’t been that long, but it’s felt like an eternity because I’ve been so impatient to share more cupcake adventures with you guys!  I was really excited to finally get these pictures developed for this layout and I worked my tooshie off to get this 4-pager all nice and pretty for today 😀  Although I don’t scrapbook a lot of cupcake pictures (sometimes I just like keeping photos in albums; I don’t feel the urge to scrap absolutely everything, ha!), it’s SO much fun when I do because cupcakes themselves are fun and colourful and whimsical, and what I have for you all today are deliciously chocolatey vegan cupcakes from the Blue Banana Market coffee shop in Kensington Market.

I know I toot my horn a lot about this neighbourhood.  Heck, I think I have 2 posts from this past week alone dedicated to it (yesterday’s holiday cookie photos and King’s Café from Christmas eve), but I can’t help it because I simply love it so much.  And Blue Banana is one of my FAVOURITE places to shop in the city.  Located at 250 Augusta Ave. (nearest major intersection is College St. and Spadina Ave., west of Spadina), it’s this giant gift shop with everything from offbeat clothing and jewelry on the 2nd floor, to stationery, candy, kitchen accessories, books, lotion, and toys on the ground floor.  And by the front entrance is the cutesy coffee shop with delightful desserts like cookies, Turkish delight, chocolate covered pretzels, brownies, and carrot cake among other things. 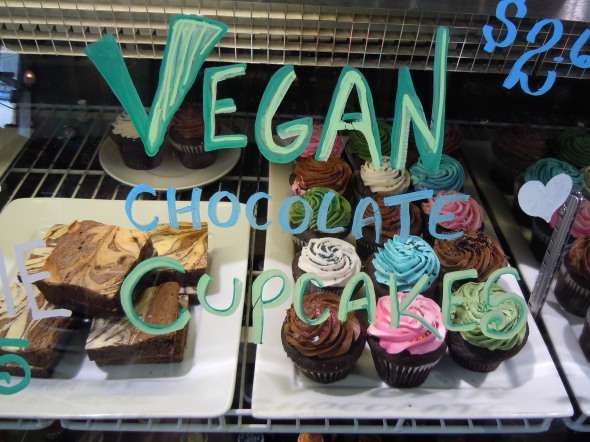 Now, I can’t comment on the java as I’ve never had a cuppa joe there (remember how I mentioned I didn’t like coffee?  I know, go ahead and chuck things at me), but I can tell you how good the cupcakes are.  They are different and in the best way possible.  They are chocolatey moist and denser in texture than your average non-vegan cupcake.  You can taste the richness of the chocolate cake batter and it’s a very well-rounded flavour.  You’re not left with a dry aftertaste and the frosting on these sweet things are just amazing.

Cupcake frosting is done differently all across the board and  The Cupcake Shoppe by Yonge and Eglinton does theirs buttercream style.  These vegan cupcakes on the other hand are topped with a frosting of a thicker, sugary cream consistency that tastes like spun sugar.  When you take a bite of the cake and frosting together, it is heaven in your mouth.  It’s thick and sweet and SO delicious when you have a mouthful of the frosting with the fudgy cake.  For those are who interested in knowing the ingredients that go into making these cupcakes vegan, I am working on getting this information, so I’ll be sure to let y’all know when I have it! 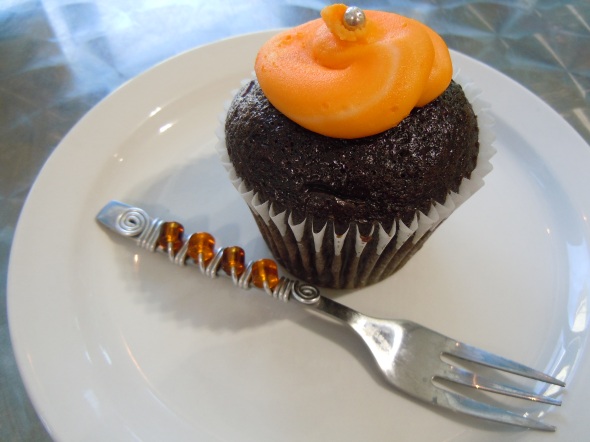 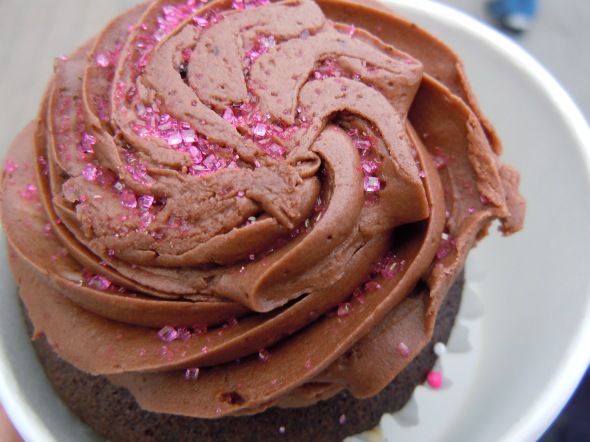 Now here’s an interesting tidbit to keep in mind: Blue Banana is simply a retailer that sells these cupcakes in their shop on behalf of another cupcakery in the city, OMG Baked Goodness (located at 1561 Dundas St. West) who delivers these sweet treats to Blue Banana every day, so there’s more than one location you can snag these vegan cupcakes!  And yes, you can bet your sweet butt I’ll be paying a visit to OMG Baked Goodness when I get the chance 😀  If you’re curious, thus far I’ve had the cupcake with orange frosting and edible pearl, orange frosting and crystal sprinkles, chocolate frosting with pink crystal sprinkles, and the carrot cake (not pictured or scrapbooked).  My favourites?  The ones with the crystal sprinkles.

Cupcakes are $2.65 each (before taxes) and you can eat them in the coffee shop or take them to go…like me, in a cup with a fork, haha.  Seriously, if you don’t take it to go in something, you are going to wind up with frosting all over your nose, face, and mouth.  It was cute having my boyfriend Richard  kiss the frosting off me, but you know…you don’t always have assistance with you *laughs*