While working on my big Cupcake Chronicles feature page today behind the scenes, I realized I never shared my photos of Short & Sweet Cupcakes’ Vaughan location or my photos of their amazingly delicious Megan’s Mocha Madness cupcake with you guys after all this time!  I know this post is a little on the late side given how it’s been about a year since Short & Sweet opened their second location, but Ate by Ate just wouldn’t be complete without a post showcasing their York Region arm in all it’s beautiful cupcake lounge-like glory!

Located at Major Mackenzie Drive West and Dufferin St. within the Eagles Landing complex, the shop boasts a spacious, airy seating area near the back as well as a lovely hot pink seating lounge right by the front window, perfect for enjoying your cupcakes with friends!  They have colourful cupcake artwork on the walls, giftware to purchase up at the front and a big display case for their many flavours of cupcakes.  It’s a fun and fresh space and I really enjoy taking photos of the cupcakes here because the big window lets a lot of nice natural light in. 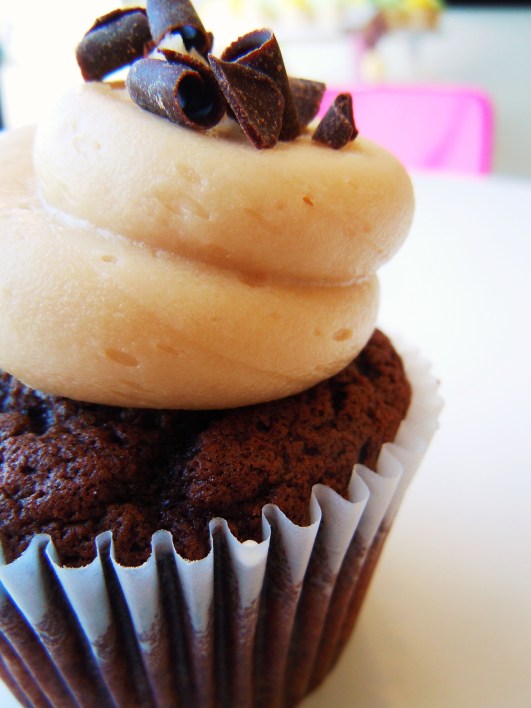 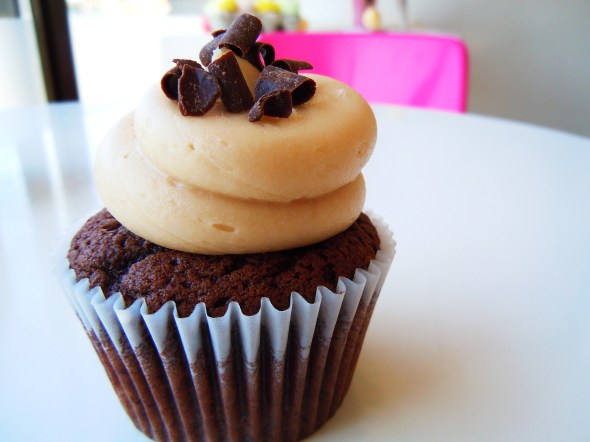 And speaking of light, today’s photo spotlight is for one of my Top 5 faves from Short & Sweet, the Megan’s Mocha Madness which is a Friday-only specialty.  I have waited so long to have this.  I have had so many Fridays pass me by without this cupcake in my life because of either work or school or just not being in the area so you can imagine my squealing happiness over this morsel of decadence when I finally got around to having it.  It’s a chocolate cupcake with mocha coffee frosting and chocolate curls on top.  The frosting is one of the most delicious frostings I’ve ever had and this is coming from a girl who doesn’t even drink or like coffee!  It’s one of their best because the chocolate cake is fudgy and moist and the frosting is extremely flavourful and creamy without being overpowering with that bitter coffee aftertaste or too sweet and lacking in depth.

I think they hit the nail on the head with this one and  I wish so much that this was part of their every day roster as opposed to just being available on Fridays because this is a flavour that I could go for time and time again.  Even though I didn’t take these particular photos at their Vaughan location (there’s a reason for that, read on), I wanted to share them anyway since it’s been so long since my last Short & Sweet post. 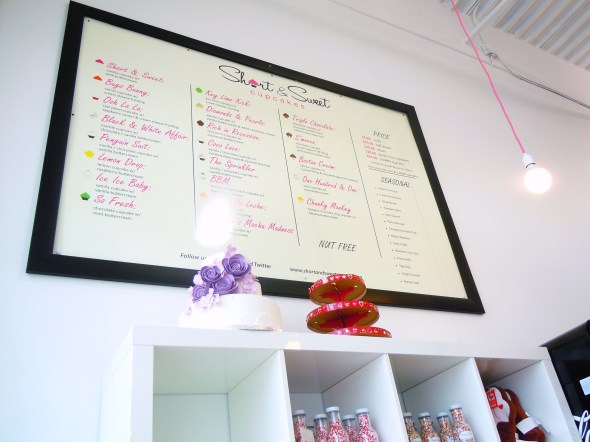 So, you’re probably thinking, “well, that’s terrific that your favourite cupcake shop opened a location in York Region where you live!”  You’d think that.  But after careful calculations and an experiment with my best friend, I have discovered that it is actually easier for me to get to their Avenue Road shop instead of the one on Major Mackenize!  At least during the weekends.  It’s easy-peasy during the week, but the timing doesn’t jive with a work schedule and boy is it ever awkward on a Saturday.  Unless there’s a car involved or a random weekday I have off, getting here on Saturday would require taking 2 buses (which isn’t the most practical because there’s some doubling back involved) and then walking for another half hour and then finally walking on the side of the road to get into the complex because no sidewalk exists.  But all of this mumbo-jumbo?  Because the most straight-forward transit route to the shop doesn’t run on weekends.

Regardless of the confusing transit issue, I love the Vaughan location for its larger space and I can definitely appreciate the fact that both Ginza Sushi and Yummy Market are both a hop, skip, and jump away!  I’ve been working really hard on the Cupcake Chronicles since Ate by Ate started and it’s been a joy profiling so many shops and tasting all the variety the city has to offer.  I’m hoping to fill in some more holes this year so that we can have photo spotlights on Short & Sweet’s Blueberry Yum Yum in May and Tropic Thunder in June at the very least.  Look out for Valentine’s Day cupcake posts in the coming weeks!

Short & Sweet Cupcakes serves two locations in the GTA: 1945 Avenue Road (south of Wilson Ave.) in Toronto; open Monday to Saturday from 11am-6pm, closed on Sundays || 1480 Major Mackenzie Drive West (at the corner of Dufferin St.) in Maple, Vaughan; open Monday to Saturday from 12pm-7pm, closed on Sundays.  You can also find their cupcakes at some Aroma Espresso Bar locations!