Everyone in my family has had honest-to-goodness brushes with coffee.  My mum loves her coffee so much she has one every day.  This  passion has rubbed off on my dad and now he even drinks it on a daily basis.  And my brother?  Well, he grew up being fascinated by the beverage but was deterred by my mum who made it very clear that he was much too young to drink it.  So when he was a little older, I took matters into my own hands and coaxed him into trying it black.  That didn’t go over so well.  So even though he’s no coffee addict, he has had a grand total of 2 cups of coffee during his 20+ years of life.

Which is certainly more than I can say for myself.  I’ve never even had a full cup.  Not even a full gulp.  Just a tentative sip that left me grimacing for the next hour.  I know, I’m in the minority!  Let it be known that I don’t drink coffee, text, or drive.  People can tsk and give me confuzzled looks all they like.  The closest I’ll ever get to coffee is via coffee desserts (and don’t even try to poke and prod me about the texting – it’s not happening!).  Cafe au lait macarons from Butter Avenue, Cuban coffee crème brûlée from Delux on Ossington, and mocha buttercream frosted cupcakes from Short & Sweet.  Clearly, I’m no coffee queen and yet I am loving the coffee desserts!  What is going on?!  I guess my tastebuds are just that weird! 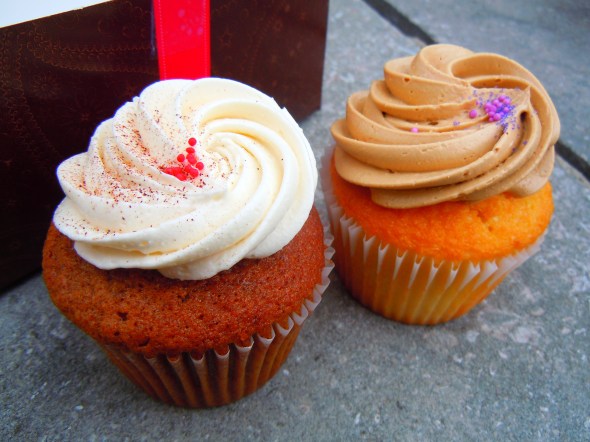 Maybe the Naughty n’ Spice is the way it is because the Sleepless in Toronto cupcake kept it up all night partying. Har har.

It took me 16 visits to finally get to it, but it was worth it: my first encounter with The Cupcake Shoppe’s coffee buttercream Sleepless in Toronto cupcake!  I have known about this morsel of yumminess since the first day I went back in 2009.  And for the life of me, I couldn’t figure out why I kept missing it!  It’s been almost 3 years, folks!  The Cupcake Shoppe runs on a random rotation of cupcake flavours every day and it just so happens that my visits were clearly out of sync with the appearance of the Sleepless in Toronto coffee cupcake each and every single time!  But the stars aligned and things were meant to be on this day: I got my Sleepless in Toronto coffee buttercream frosted cupcake on vanilla cake!   And it was happily shared by my mum and I.  It’s nice to share the wealth, even when it’s a rare commodity like this. 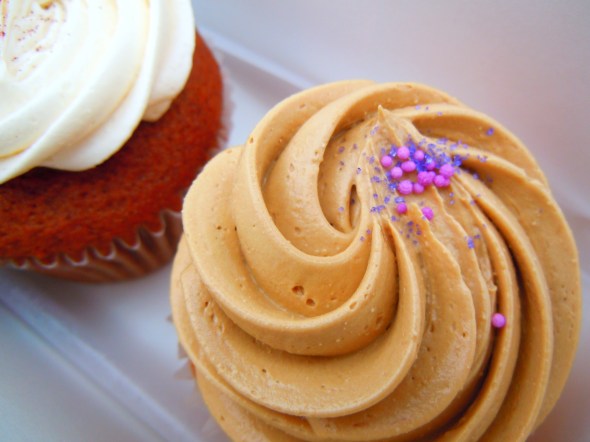 The Cupcake Shoppe is located in the Yonge and Eglinton neighbourhood at 2417 Yonge St., north of Eglinton on the east side of Yonge St.  They JUST opened up their second location in Vaughan last week on Bathurst St. and Rutherford Road at 9340 Bathurst!  Hurray for more cupcake options in York Region!

They have a rotating menu of cupcake flavours each day and each cupcake is priced at $2.85.  For more Cupcake Shoppe goodness on Ate by Ate, click HERE!  There are write-ups, scrapbook layouts, and tons of photos on The Cupcake Shoppe’s following flavours: Cookie Dough, Eh? (maple), Lemon Drop & Lov’n Lemon (the first one is one of the most amazing lemon cupcakes you will ever eat and the latter, not so much), Red Velvet, Naughty n’ Spice (fall seasonal), After Ate (mint chocolate), Pretty in Pink (raspberry cupcake with raspberry buttercream), and more recently, the delicious summer seasonal Lime n’ Licious.