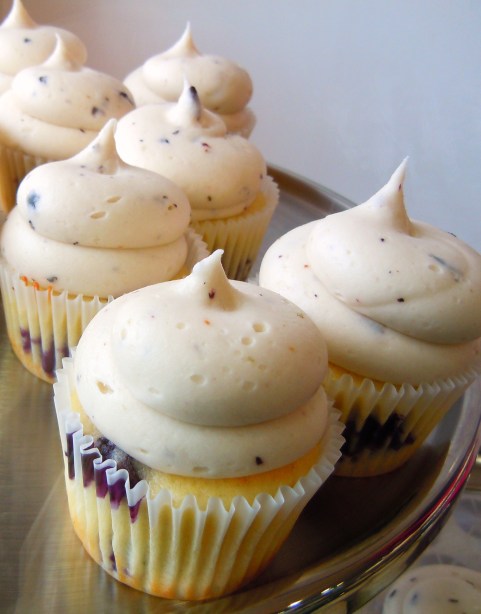 I love finding out about special cupcake flavours, new cupcake shops, and new locations of already-existing cupcakeries opening up elsewhere in the city, so The Cupcake Connection is my way of pooling together a ton of different bits and bobs and keeping all of us in the know!  There’s a lot of information ping ponging all over the place and it can be pretty cumbersome lily pad hopping from site to site, looking out for each and every single new flavour, location, and event update.  I do it because I love looking at cupcakes all day long and because I’m little crazy like that.  So enjoy my cupcake craziness!

Short & Sweet Cupcakes are serving up fresh blueberries and moving up north!  Short & Sweet’s May Flavour of the Month is Blueberry Yum Yum, a vanilla marscapone cake studded with giant blueberries bursting with juiciness, topped with a creamy blueberry cream cheese frosting.  I had this cupcake last year but didn’t make a post about it because I didn’t have nice photos  (except for the one you see here, but 1 photo does not make a good or thorough post!), so I’m really looking forward to having it again so I can report back!

And for those us craving more cupcakes in York Region, Short & Sweet will be opening up their 2nd location in Vaughan (specifically in Maple) at Eagles Landing by Dufferin & Major Mackenzie THIS FALL!  I actually found out about the exciting news MONTHS before they made their official announcement (a little birdie told me), but I kept mum about it because spilling the beans would have spoiled the announcement.  But I – and everyone else – can jump for joy now!  I am so excited because I’ll have the option of getting my beloved Short & Sweet Cupcakes closer to my neck of the woods and not have to use two fares to get them.  Win-win!

Speaking of new locations opening up, The Cupcake Shoppe, Crumbs & Co., and Le Dolci are all opening up new shops and spaces later on this year!  The Cupcake Shoppe will be heading up north to Vaughan and setting up shop at Rutherford and Bathurst (which, to my knowledge, should be near the giant Longo’s supermarket), Crumbs & Co. will be heading south to Avenue Rd. and Lawrence in North York, and our beloved cupcake, macaron, icing sugar towers that is Le Dolci will be moving into a brand spankin’ new studio and retail space on Dundas Street West right across the street from Trinity Bellwoods Park!

Learn to make these posh designer cupcakes at one of Le Dolci’s classes!

Even though I’m no longer an active icing sugar queen at Le Dolci, I still enjoy keeping up with what’s going on at the studio, and this move is so incredibly exciting for Lisa, Miya, and the other girls!  The space is will offer a larger area for cupcake, cake, and macaron classes, there will be retail component to the new space, and Lisa and Miya are also working on offering new sweets and classes to the mix once the move is done.  The Le Dolci team are always updating their Facebook page, Twitter feed,and blog, so you can definitely keep up with news and updates if you follow them on any one of those.  I don’t have exact months or dates on me right now, but I promise to tell you all whenever I know and you can bet I’ll be at the new locations with camera and sweet teeth on hand!

Much like David’s Tea, I think cupcake shops are so smart when choosing new locations to expand.  For those heading into York Region, the market is wide open because for one, there aren’t as many cupcake shops (and the ones that do exist are very far away from one each other) and for another, a lot of York Region is still under development, with new neighbourhoods and districts being formed every year.  There’s Markham, Richmond Hill, Thornhill, Woodbridge, Maple, Aurora, the list goes on.

The Cupcake Shoppe will be opening up shop in Vaughan!

For those who love to try out new flavours, Yummy Stuff on Queen West in Parkdale has a new, fruity flavour for the month of May: the Hummingbird Cupcake!  This is a special pineapple, banana, and coconut cupcake with cream cheese frosting and I specifically found this out because I called them and asked about their May flavour.  I’m not full-blown insane, just dedicated.  And this week’s Treats of the Week at Prairie Girl Bakery and monthly specials at Dufflet are going fruity tutti too!  Prairie Girl is dishing out a raspberry buttercream on their dark cocoa chocolate cake and a lemon and strawberry buttercream on their golden vanilla buttermilk cake for this week, and I think these flavours would pair up amazingly with either their regular lemon cupcake or their regular toasted coconut.

And to celebrate spring and Mother’s Day, Dufflet has come out with a bevy of new cakes, tarts, and cupcakes for the occasion, all of which are available until at least May 21st.  Their newest cupcake flavour is a strawberry shortcake filled cupcake, which fits into their new line of giant cupcakes with fillings!  The cupcakes are $2.85 and are available at all 3 of their Toronto locations.  Dufflet is also hosting their 5th annual Tour de Dufflet bike ride in support of the Toronto Cyclist’s Union from May 22nd to June 30, and will be a part of the Uptown Yonge’s Sidewalk Sale on Saturday, May 12 from 10am-5pm, where they’ll have amazing promotion prices and deals on their products.  Does 2 for $5 cupcakes sound awesome or what?!  For more information, check out their April & May newsletter HERE for all the details!

2 thoughts on “The Cupcake Connection! New Locations & Shops Plus Flavour Updates From Cupcakeries Around the City”