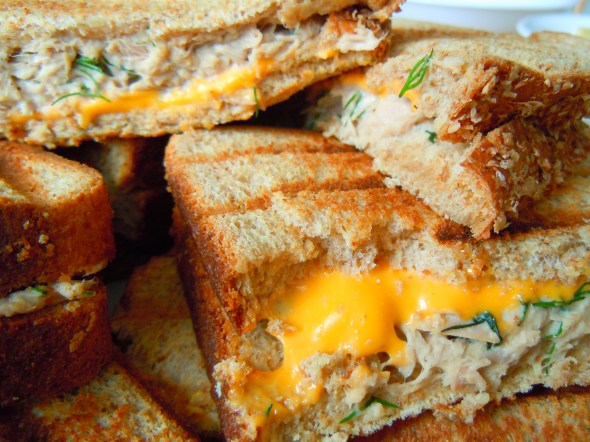 I love my new sandwich grill, George.  Since the day my mum, my brother, and I brought him home, we have been cranking out the grilled sammies like crazy!  We’ve been picking up different loaves of bread at the bakery and markets, snatching up a loaf of marble rye here, olive oil and sea salt crusty foccacia there, and flipping through my Food Network magazines almost every day for any and all sandwich ideas.  In a nutshell, I have become obsessed.  And really, this new obsession of mine is quite the 180!

Growing up, I never disliked sandwiches and bread, but I never particularly looooved them either.  Sure, I used to love my PBJs when I was a wee one in kindergarten, but over time the sandwich became, in my foodbook, a safe school lunch stand-by, not a meal that was in any way exciting or “ahhh” inducing.  My brother and mum, on the other hand, have been the bread-heads in the family for years and while I enjoyed sandwiches enough, they were never my first choice for a meal.  Grains such as pasta and rice were, instead, always the ones to win my heart.  The only exception I ever made was for the amazing turkey sandwiches I had in high school from Raymerville Deli and Bakery and I still adore these sandwiches to pieces till this day. 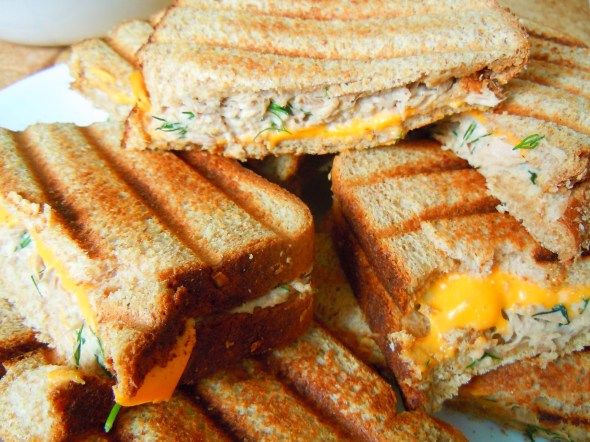 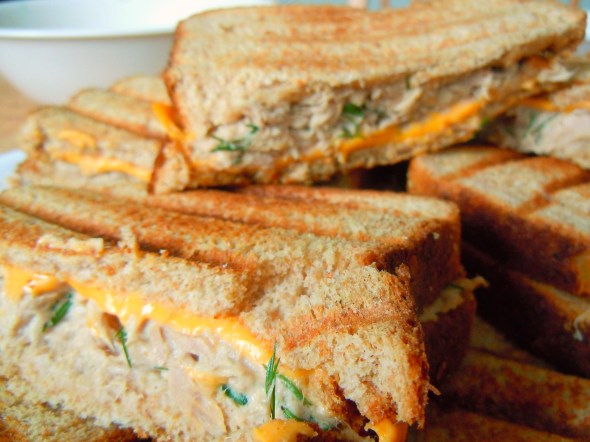 After trying so many different kinds of bread and sandwiches over the past 3 or 4 years, my tastebuds happily changed their tune and began craving sandwiches with everything from grilled vegetables, different spreads and sauces, and lots of different cheeses and proteins like seafood, tofu, and eggs.  Our new grill, George, has only fuelled this growing love for sandwiches into a fiery spitfire.  Thus far, we’ve tested George out with a simple grilled ham and cheese on caraway rye, a grilled turkey on marble rye with tomato, yellow zucchini, and basil, and today’s special, tuna dill cheese melts on wheat! 😀

And as always, there’s a story behind the food and in this case, the wheat bread!  When I think of wheat bread, I’m reminded of how I’m actually not that fond of the bread crust, but more importantly, I’m reminded of the very first time I ate wheat bread.  It’s such a cute memory and I have my aunt and cousin to thank for it.  The first time I ate wheat bread was at the age of 4 during a play-date with my then 3-year-old cousin at my aunt and uncle’s house during the summer.  After splashing around in his kiddle pool in the backyard, we dried off, washed up, and sat down to lunch.  My aunt placed before me a kiddie mozzarella cheese sandwich made with wheat bread and from that day forth, cheese sandwiches on wheat bread have been that nostalgic comfort food. 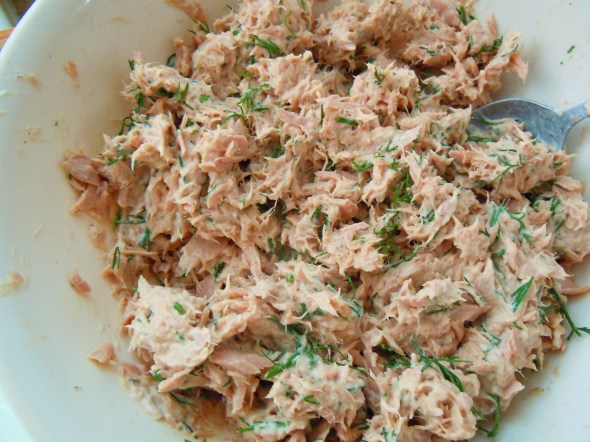 Now, enter the beloved wheat bread in today’s tuna melt sandwich post.  And if I may add, I love tuna salad.  If my memory serves me well, I professed my adoration for tuna salad in this post, and when I came across the tuna melt sandwich idea in my Food Network magazine panini booklet, I literally did a face palm and thought, “why in the world did this not occur to me sooner?!”  Tuna in a can is a pantry staple in our house so we put the idea to use right away.  We used flaked tuna in a can, mixed in oodles of fresh dill we picked up at St. Lawrence Market, some mayo dressing, and a nice helping of black pepper.  We spread the tuna salad mixture on slices of whole grain wheat bread and topped it off with slices of soy cheddar cheese.

The result?  AMAZING grilled tuna melts!  Tuna salad, to me, is really versatile.  You can mix in some celery, some onion, and plenty of herbs and spices like parsley, chives, chili flakes, garlic salt, and pepper.  I LOVE having mounds of fresh dill in my tuna salad.  The soy cheddar cheese was perfect for these sandwiches and ugh, they were just so good.  So if there’s a moral to this story, here it is: dill is amazing in tuna and so is soy cheddar cheese.  And my grill George is awesome.  Tis all. 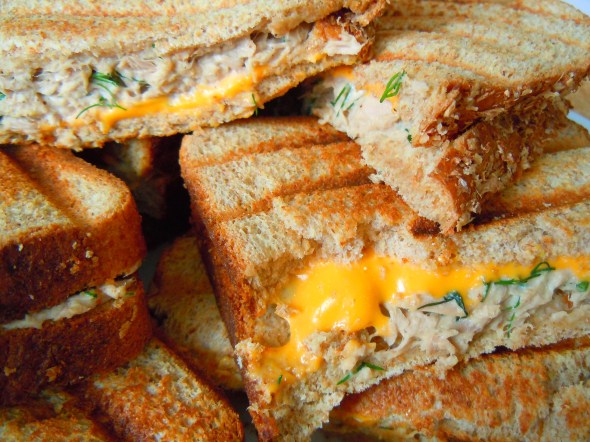 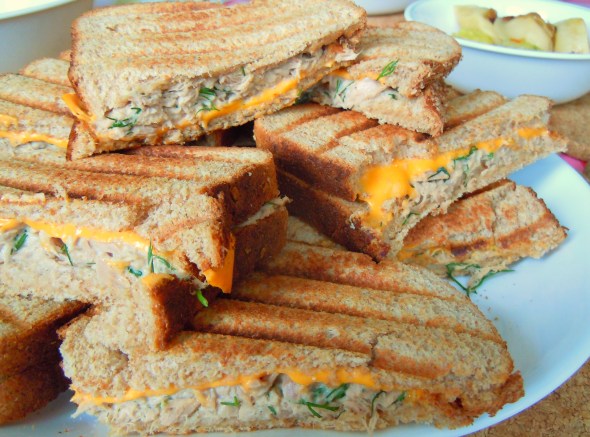